The monastery of Zica , a foundation of  King Stefan the First-Crowned from the beginning of 13 century. It used to be the seat of the first Serbian archbishopric and archbishop Sava Nemanjic. Here was crowned Stefan the First-Crowned, the first Serbian ruler “wreathed by the royal crown” in 1217.
Studenica monastery  was 1986  included  on the list of World Heritage Sites, by UNESCO with the description: “The Studenica Monastery was established in the late 12th century by Stefan Nemanja, founder of the medieval Serb state, shortly after his abdication. It is the largest and richest of Serbia’s Orthodox monasteries. Its two principal monuments, the Church of the Virgin and the Church of the King, both built of white marble, enshrine priceless collections of 13th- and 14th-century Byzantine painting”. It was the seat of creation of first Serbian literary works. The Church of the Virgin served also as the mausoleum of the dynasty and its founder.

The monastry of  Ravanica, memorial monastery of Prince Lazar, its founder whose tomb is in the church. Prince Lazar built it shortly before the 1389 battle with the Turks at Kosovo.
Manasija or Resava monastery, a memorial of Prince (Despot) Stefan Lazarevic from early 15 century, famous in the past for its copying school and now for  frescos of Holy Warriors which depict the equipment of Serbian warriors of the late Middle Ages.

Topola, in the heart of Sumadija, an administrative centre and a fortified town from which runs the leader Karadjordje Petrovic the first Serbian uprising against the Turkish rule.
Oplenac above Topola with the mausoleum of the royal dynasty Karadjordjevic, and the famous church of St. George decorated with 3 500 m2 of gilded mosaic.

Down the Danube to the  ancient time

Vinca, an archaeological site which reveals the oldest organized settlements in Europe from Neolithic times after which the culture of the central Balkans and the Pannonian plain is called the “Vinca” culture.The Vinča symbols, sometimes called the Vinča script, are mostly considered as constituting an instance of "proto-writing"  of Neolithic era (6th to 5th millennia BCE).
Smederevo, a medieval town of the last great Serbian ruler Djuradj Brankovic of the early 15 century with a well-preserved fortress on the Danube’s bank.
Viminacijum, where the Mlava flows into the Danube, we find one of the most important Roman towns and military encampments from the period from the 1st to the 6th century. The civilian settlement next to the encampment during the rule of Hadrian (117-138) gained the status of a municipium.The archeological site near by is a special attraction of the area,  prehistorical find of mamuth skeleton 5.000.000 years old.

From Belgrade to Novi Sad

Novi Sad, the capital of Vojvodina, an administrative, economic, cultural and university centre of a region with the remarkably well preserved fortress Petrovaradin which overlooks the city from the other side of the Danube.
Fruska gora, a national park with luscious forests, is hiding 16 orthodox monasteries from between 15 to 18 centuries.

Sremski Karlovci, a city – museum, the centre of Serbian culture and religion in 18 and 19 centuries.

In 1802 the village of Kovacica with a Slovak ethnic minority was established fifty kilometres from Belgrade. In this village of numersous crafts especially developed were naive arts which have been made famous throughout the world, in the first place, by  Zuzana Halupova and Martin Jonas.
The international ethno centre Babka promotes unique artistic features of the  region.


TWO-DAY EXCURSION
Down the Danube to Eastern Serbia

Vinca, an archaeological site which reveals the oldest organized settlements in Europe from Neolithic times after which the culture of the central Balkans and the Pannonian plain is called the “Vinca” culture. 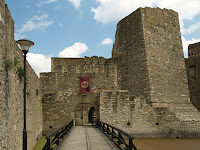 Smederevo, a medieval town of the last great Serbian ruler Djuradj Brankovic of the early 15 century with a well-preserved fortress on the Danube’s bank.

Viminacijum  near Požarevac, where the Mlava flows into the Danube, we find one of the most important Roman towns and military encampments from the period from the 1st to the 6th century. The civilian settlement next to the encampment during the rule of Hadrian (117-138) gained the status of a municipium. 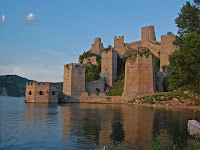 Golubac, a unique fortress at the Djerdapska gorge’s entrance built on a ridge above the Danube with its nine towers from which Prince Lazar controlled this route as early as 14 century. 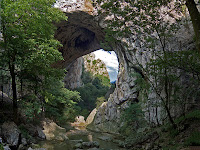 The Vratna canyon with its three amazing “gates” carved by the river Vratna in chalk cliffs. 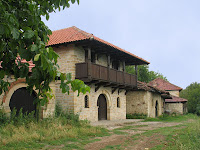 Rajacke pimnice, a village of 300 wine cellars where top-quality wine exported to France used to be produced. Today rarely visited only by those with the privilege to taste wine in the still functioning cellars.. 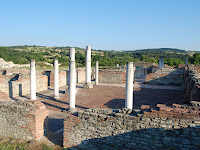 Romulijana, the best preserved locality of late antiquity in Serbia, protected by UNESCO. Imperial palace of the emperor Galerius, born and buried here with his mother Romula. 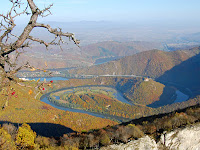 The Ovcarsko Kablarska gorge through which the river Western Morava carves its way and whose inaccessible slopes hide 10 Serbian Orthodox monasteries from 16 and 17 centuries which is why it is also called the “Little Serbian Holy Mountain” (i.e. Mt Athos). 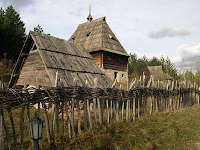 Sirogojno, the oldest regular ethnic locality in Serbia, a village-museum with typical log dwellings furnished in corresponding style and equipped with utensils. A wooden church of St. Peter and Paul. A restaurant with local culinary specialties. 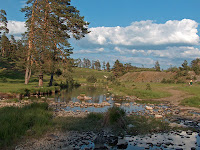 Zlatibor, a tourist and mountain resort at 1000 m. The highest mountain is Tonik. In winter full of skiers, in summer full of hikers enjoying the fresh air and rolling meadows.

Sarganska osmica, a narrow gauge railway along which up to 1974 a train from Belgrade via Sarajevo to Dubrovnik crossed the mountain saddle between Mokra Gora and Sargan, a height difference of 300 m. Today used as a tourist attraction and outdoor railway museum. 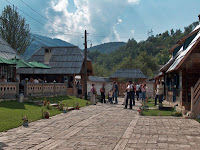 Drvengrad, built by Emir Kusturica on the hill Mecavnik while shooting his film “Life is a Wonder” and succumbing to the beauty of the local countryside.